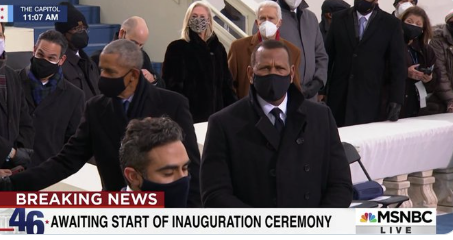 What a day, we have a new POTUS and VPOTUS, and J-Lo and A-Rod were at the Inauguration. The reason A-Rod was there is his Wife Jennifer Lopez was one of the performers, and performed a medley of  “This Land is Your Land” and “America the Beautiful” with a side of her own song from back in the day “Let’s Get Loud”

J-Lo couldn’t stop herself from throwing in “LET’S GET LOUD!” at the end of her ‘This Land Is Your Land’ medley
pic.twitter.com/4sqfPyjo7q

Also during the coverage of all the VIP’s entering the seating area along with all the dignitaries and former President’s the TV cameras scanned the crowd and you may have said out loud….”Wait, is that A-Rod?” Yep, it was and the memes that followed were amazing.

why is A-Rod in the security detail pic.twitter.com/eFbsCrjEbR

Not me forgetting that A-Rod was at the Crossing of the Delaware.#Inauguration pic.twitter.com/TE7ajDI9yo

Never forget when A-Rod was at the signing of the Declaration of Independence. pic.twitter.com/ZRsZlN9N90

at least once a year, i turn on a national event and a-rod will somehow just be there for some reason, fulfilling his destiny as baseball’s forrest gump pic.twitter.com/ssio3aXXjT

A-rod hanging out at the inauguration hoping for a pardon for this pic.twitter.com/gBKl44dc6x

I can’t wait until Jeter shows up out of nowhere to get a better seat than A-Rod.